From Saturday, December 8 to Sunday, December 23 2012 De Haagse Kunstkring, Denneweg 64 The Hague was showing the exhibition Magic of Motion. 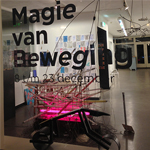 The starting point to explore the theme of movement through different disciplines and, consequently, that appeals to all the senses, an interactive, playful, exciting exhibition is fully realized.

The structure of the exhibition was by means much discussion and planning well prepared in advance so we managed with very different elements to create a clear set was an exhibition.

During the very busy opening lecture and finissage lively discussion about the work arose because active include the interactive nature of the exhibition the visitors challenged to, or on, the artwork to take (My rocking nightmare), bringing art in motion instead (Noire et Rouge, Festival of motion) to make sound or to move (Stardust Collector) a robot.

In the garden, the hanging metal sculpture (Poseidon’s revenge) and the image (Birdman and little) illuminated by blazing fire pits. Besides the physical moving work there was room for works in which the movement overdrachtelijker was approached or to be placed in space, the motion was suggested.

Most visitors found the whole of the exhibition an exciting, interesting experience and very different from the regular exhibitions in the HKK, also the gallery owner and manager expressed this view. They were also impressed by the amount of visitors. The crowds during the musical recitation of Loes Ledeboer was so great that not fit the audience in the hall, all these people have also expanded visited the exhibition.

The advertisements in the national newspapers (Volkskrant, NRC, Trouw) and The Hague Central have also contributed to the exhibition, despite the holidays, well attended. Therefore, the visibility of the artists have certainly increased and some also show a broad national audience. Another side of himself

Cooperation in the entire group, the end result and the positive reactions are experienced as stimulating, that in addition to meet to evaluate the recent period and the exhibition the idea arose to this exhibition elsewhere in the Netherlands and perhaps across the border, again to build.